A Question of Growth

Cultivating a lively community of faith is not rocket science or brain surgery. I am well aware that people attend church for some very basic reasons. People go to church to hear a consistent word—sermons are as essential to the life of a church today as they have ever been. People go to church because they love the music—faith has been powerfully conveyed through song and stanza for generations. People go to church because their children are well taken care of—they receive assistance passing on the Christian tra­dition within their families. Dynamic sermons, music, and chil­dren’s programming can certainly propel growth. With only one of these components in place, a community can experience increase. In truth, it would be hard to avoid growth if a community had all three working together.

But what propels exponential growth? What allows a church to grow out of a staid and stable program-based model of ministry into a transformative, life-altering community of believers? How does new and innovative ministry take hold within a community whose historical strength has been its resistance to change and its ability to endure against all odds? I did not know, but after only a couple of years into my pastorate at the United Church of Christ Norwell I began to witness a pattern of growth that was as surprising as it was unsettling. We seemed to be growing in spite of ourselves, and in the most unplanned of ways . . . and I suspect that deep down I was still hoping for an approach to church growth that involved following a list of well-defined steps toward success.

Over the last decade, we at UCC Norwell have engaged in nu­merous visioning processes, and none of them have turned out the way we had imagined they would. We would pull together a task force to address some issue of concern, meetings would be held for weeks on end, recommendations would be generated and presented to the church, resolutions would be voted on, and new programs and structures would be put into place, only to discover that we missed the mark and growth was occurring in an entirely different location than that which we had expected.

One of the earliest examples of this frustratingly wonderful pattern occurred within the first couple of years we spent work­ing together. I had been working with the Alban Institute in an effort to gain clarity about the dearth of young clergy in mainline Protestant denominations. After gathering statistics from across the country, we confirmed that the lack of young people enter­ing ministry in mainline denominations threatened the long-term health and viability of our brand of church. The math was as sim­ple as it was disheartening. The trickle of young clergy entering pastoral ministry could not meet the great wave of ministerial re­tirements that could be anticipated on the horizon. Even with an increased number of second-career pastors, the impending pasto­ral vacancies were going to dwarf the pool of available applicants.

Armed with this irrefutable evidence of the demise the church I loved, I convinced UCC Norwell that we needed to begin to pre­pare ourselves to be a church without clergy. Even though I be­lieved we were still ahead of the curve by a few years, we needed to get the church ready for the impending clergy crisis. We began by convening a task force to examine how we could more fully estab­lish ourselves as a lay-led congregation. The result of an extensive period of discernment was to establish a new model for pastoral ministry that deemphasized the role of ordained clergy. No lon­ger was the program life of the church going to be created and driven by professional religious leaders. If a program was going to be implemented in the life of our church, it needed to be generated by the efforts and initiative of church members. Pastors were no longer to engage in ministry unless they were helping to train lay members for the ministerial tasks before them.

We created a Teaching Pastorate model for ministry that stressed preparing the laity to take on the work of the church. The idea was expansive. Fully implemented, the people of the church would do the pastoral care, the teaching of children and adults, the preaching and worship leadership, and the visioning of the future. We didn’t plan to make immediate and radical adjustments, but we knew we needed to slowly shift aspects of pastoral ministry to the laity. For example, the members of the church wanted a compre­hensive adult education program that the church had never really established before. Our pastoral staff could have simply jumped in and started offering classes. However, with the desire to have the laity lead, we created an adult Christian education ministry team that, with a modest amount of pastoral support, would de­sign, promote, and teach the educational offerings for our adults. Within a relatively short period, we not only increased the number of lay members in leadership roles, but we also took a gigantic leap forward in the number of adult educational offerings we provided for the congregation. The energy the new group possessed was im­pressive, and it was clear they not only appreciated how they had been empowered to engage in ministry, but they also stepped up and did amazing work—work many trained pastors would not be capable of achieving.

Efforts like this were made with the intention of crafting a community that could one day move forward without having the need of professional clergy. It was a compelling idea. We were al­ready seeing signs that strong lay leadership could replace pastoral leadership in certain instances. We seemed to be on our way to being a church that could thrive without clergy. That had been the plan and we were prepared to make an attempt to implement it. However, that was when the Holy Spirit began to upend our plans.

Soon thereafter, church members began making appointments with me to talk about the possibility of entering seminary. One af­ter another, church members were sensing a call to pastoral min­istry. In a period of four years we sent seven church members to seminary. We had set out to create a model for ministry that would allow the church to survive without clergy, and we unwittingly cre­ated a model of ministry that prompted people to choose to pursue pastoral ministry as a career. We had a plan, we had a goal, we had an end result in mind, and our efforts had an effect that we never intended. In an attempt to create a clergy-free church, we wound up creating clergy that are now serving local churches in our area.

So many times in UCC Norwell’s ministry together we have done what we believed to be faithful discernment—we set our sights on a goal, we began our work, only to have the Holy Spirit produce growth in an entirely different direction than we intend­ed. It has happened with such frequency that I have begun to think that any attempt to be strategic in the life of the church is fraught with peril. And yet, perhaps the effort to grow, no matter how mis­guided, uniquely opens us up to the possibility and potential of the Holy Spirit. When we give the Spirit an opening to work in our churches, that is when growth takes root even in the most unex­pected of ways. To this day, I am amazed at how getting it wrong has turned out to be just right.

In Scattering Seeds: Cultivating Church Vitality, Stephen Chapin Garner and Jerry Thornell share the story of their home congregation, the United Church of Christ in Norwell, MA. This average congregation has approached congregational life in a not-so-average way. Garner and Thornell don’t claim to have the secret to church growth and vitality, but in sharing the story of their simple church in New England, they give hope and innovative ideas to congregations in regions all over the country .

Humble leadership, grounded in the teachings of Jesus, means recognizing that what we have and who we are are gifts from God, and our lives should reflect our gratitude for these gifts. It requires us to be radically and creatively open to God’s guidance, grace, and presence in everything. When we lead out of such openness, God’s power and grace flow through us. Standish helps us explore the practices and attitudes that make humble leadership effective leadership.

Diana Butler Bass’s groundbreaking project to explore encouraging signs of vitality among mainline Protestant churches is now gaining the momentum of a movement. The Practicing Congregation is a central text on the road to envisioning a new way of being a church.

Lost in the Middle? Claiming an Inclusive Faith for Christians Who Are Both Liberal and Evangelical
by Wesley J. Wildman and Stephen Chapin Garner

There exists a deep and broad population of Christians who feel the labels of “liberal”and “evangelical” both describe their faith and limit their expression of it. By working to reclaim the traditional, historical meanings of these terms, and showing how they complement rather than oppose each other, Wesley Wildman and Stephen Chapin Garner stake a claim for the moderate Christian voice in today’s polarized society.

Found in the Middle! Theology and Ethics for Christians Who Are Both Liberal and Evangelical
by Wesley J. Wildman and Stephen Chapin Garner

As a follow up to Lost in the Middle?, Found in the Middle! offers a foundational approach to the theology and ethics that undergird a congregation where moderate Christians can thrive. Wildman and Garner serve as helpful guides on a quest for a humble theology, an intelligible gospel message, a compelling view of church unity, and a radical ethics deeply satisfying to most Christians with both liberal and evangelical instincts.

Let Alban Custom-Tailor a Learning Experience for You! 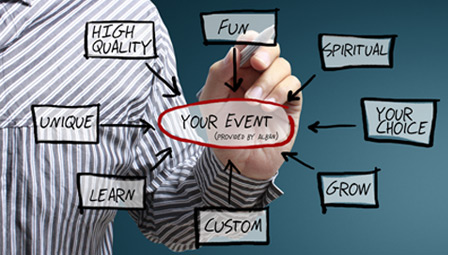 Ever want to transport an Alban seminar into your own system? Need help developing the best way to challenge and inspire a group? Looking for a dynamic keynote address or a capstone experience for a large gathering?

We can help! You need an Alban custom-tailored event!

Archive  of past issues of the Alban Weekly.