Playing in the Same Sandbox

Why Partnerships are the Future of American Congregations

Running adult educational events for congregations and their leaders is not that different from the work I did forty years ago as a volunteer with a Head Start program in Mississippi.

Give people a respectful place to spend the day, provide them something to eat when they get hungry, and send them home able to do something they couldn’t do when they arrived, and adults, like children, generally tend to be pretty adept at playing in the same sandbox while they’re at school. They don’t tend to get all that exercised about the ways they are different from one another or the rest of the world around them.

If this happens so easily when we’re young or not really thinking hard about it, why are church gatherings so likely to be homogenous—meetings of the like-minded, celebrations of sameness? Why are churches so often the poster children of the post-modern epidemic of sandbox-intolerance and bad manners? I got a look last week at how it might be different, when I helped to host a one-day workshop in Philadelphia facilitated by independent consultant and Alban author Joy Skjegstad on “New Ways to Fund Your Church’s Ministries.”

In attendance were about one hundred fifty ministers and laity from faith-based nonprofits and a breathtaking variety of churches—Abyssinian Baptist, A.M.E. Zion, and Hispanic congregations, as well as a plethora of Mainline Protestants, including United Methodist, Metropolitan Community Church, Presbyterian Church U.S.A., Episcopal, United Church of Christ, Reformed, Evangelical Lutheran Church in America, and Unitarian Universalist Association congregations.

People came not just from Philadelphia neighborhoods, but they also drove for six or eight hours from Virginia, New Jersey, Delaware, Maryland, and West Virginia. Or they flew in from Massachusetts, Illinois, Colorado, Connecticut, South Carolina and California just for the day.

On one hand, the event is a testimony to the financial pressures that churches and their leaders are feeling just to “stay in business.” On the other hand, the day’s program had not even begun when I realized that I was looking at a snapshot of the future of American congregations, all gathered together because of a seemingly unlikely partnership among:

•  The Alban Institute, an ecumenical and interfaith nonprofit organization whose roots were planted originally in Mainline Protestantism
•  Word and Deed Network, part of Evangelicals for Social Action
•  Esperanza, “one of the largest Hispanic Faith-Based Evangelical networks in the United States”
•  Palmer Theological Seminary of Eastern University, “a Christian university of the arts and sciences”
•  A network of African American and Hispanic churches of urban Philadelphia who had worked previously on community ministry projects with our workshop leader, Joy Skjegstad.

I came away having learned some important lessons from this experience—mainly that these kinds of partnerships are the future of American congregations. Why? Because…

1.  Diversity wasn’t the point of the day; it was the outcome of intentional partnerships forged to address a common, pressing need—in this case for alternative funding strategies for congregations and their ministries.

2.  This shared commitment brought us together to play in the same sandbox for a day without having first attended to any of the differences that could have been obstacles to such a gathering—e.g., beliefs, language, race, ethnicity, sexual orientation, theology, or geography.  We were so different from one another that we could not pretend politely to be the same; we had to be who we were and trust that we each had brought something to the table that all the others might find useful.  It was truly a kind of Pentecost moment!

3.  We were able to partner with one another in good faith because we realized that each of the four sponsoring organizations brought something that the others didn’t have—a hospitable location for a large group to park, meet, and be fed; a national network for marketing the availability of the event to a wide audience; connections with urban African American and Hispanic, as well as Caucasian Protestant, constituencies; experience organizing and facilitating large educational events; a reputation among evangelical Christians involved in social action and community ministry; expertise in grant writing and starting faith-based nonprofits.

4.  At this gathering, not only was the whole greater than the sum of its parts, but the particularities of our diverse backgrounds and perspectives—cultural and religious—were what gave authenticity to what was said, heard, and learned that day. No one spoke in broad generalities. The authentic voices that were heard spoke out of the concreteness of lived experience, struggling to find resources for their very specific communities of faith and practice.

5.  Each of the partners who had arranged and led the event felt that we had been the ones to gain the most benefit from our common efforts. Talk about a win-win situation!

The event came together organically. Joy Skjegstad and I first talked about an on-site, face-to-face event based on material she had developed in two previous books and a number of online webinars for Alban. I put together an online event flyer and a PDF file to email to potential supporters of the idea. Joy knew Al Tizon, Director of Word and Deed Network, from her previous work in Philadelphia. Al put us in touch with Ruben Ortiz from Esperanza, who provided scholarship assistance for some of their members who otherwise might not be able to afford to attend. Al also made possible the use of meeting facilities at Palmer Theological Seminary, where he also teaches; put two Sider Center Scholars at our disposal for the entire day; and arranged for overnight housing for the leaders of the workshop.

We didn’t experience a miraculous erasure of differences, many of which really do matter. And the Reign of God did not break in before we broke up and headed home at 4:00 p.m. Yet this fortuitous network of partners provides a compelling model, I believe, for congregational ministries of the future, if they are to have the resources necessary to carry out their various current projects, much less flourish and grow into new areas of faithfulness, responsibility, and vitality. 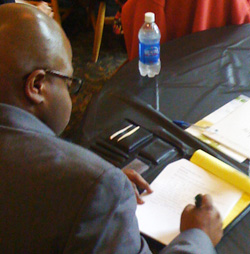 All these glorious parts of the larger community of the people of God acted like partners for these few precious hours. We yoked ourselves together and pulled in a common direction. And when it was said and done, we were glad not just for what we had learned, but for the fact that we had learned it together, differences and all.

We got a glimpse of what is possible in partnerships; and in the process we met new colleagues and we made new friends.  We saw into the future for a few hours what American congregations might look like, gathered rather than scattered, much less internally divided or opposed to one another. It was worth the trip, and worth getting metaphorical sand in my shoes. I hope that my Head Start stud
ents, now middle-aged, would have been proud to see in action what I first learned from them.

(P.S.  If you would be interested in putting together a partnership of sponsors to host this event in your geographical area, please let us know at education@alban.org.)

iPhone Photos (top to bottom): a slice of the whole; Joy Skjegstad and Ruben Ortiz; Al Tizon with our two student assistants; one of a host of avid note-takers across the room.

Comment on this article at the Alban Roundtable blog.

Wayne Whitson Floyd is the Education Program Manager at the Alban Institute.

Starting a Nonprofit at Your Church
by Joy Skjegstad


A large and growing number of congregations are setting up church-based nonprofit organizations in order to operate community development or educational programs. This book outlines the step-by-step procedures for setting up a 501(c)(3) nonprofit organization connected to a congregation using simple, easy-to-understand terminology and examples from churches that have already taken
on this task.

Winning Grants to Strengthen Your Ministry
by Joy Skjegstad


Ministry leaders possess the compassion, creativity, and knowledge about community needs that grant funders appreciate. Yet ministry groups are often less experienced than other types of nonprofit organizations in discerning which funding to seek, understanding how to build relationships with funders, and putting together proposals. This book offers a pathway to strengthening new and existing ministries.

Lending Your Leadership: How Pastors Are Redefining Their Role in Community Life
by Nelson Granade


Drawing on his own and other pastors’ work as community leaders, Granade shows that clergy possess invaluable resources for working with people, are trained to look for God’s bigger view and patient working, and understand that asking the right questions is as important as finding the right answers. He offers numerous models for clergy involvement in their broader communities and encourages clergy to reclaim their unique leadership role.

Church on the Edge of Somewhere: Ministry, Marginality, and the Future
by George B. Thompson, Jr.


George Thompson asks congregations to explore the meaning of being in the world but not of it—a church on the “edge of somewhere.” Thompson envisions a church that is deeply engaged in ministering to the community while calling on others to commit to doing the same. By analyzing the interaction between a congregation’s focus of identity and its stance with the world, Thompson helps congregations see where they currently stand so that they can discover where they must go in the future to fully live out their call to be God’s people in the world.