We Do It Differently

I was not a perfect kid. I am not a perfect adult. Far from it. When I fail in some endeavor, I am keenly aware that the reason I did was because I had a faulty assumption going in. Nine times out of ten, the primary reason I screwed up was not because I was somehow being malicious, but because my understanding of a given situation did not reflect the reality of the situation.

In the tenth chapter of Mark, two of Christ’s disciples, James and John, make a very common mistake: they had a specific idea of what it meant to be a leader, and they tried to get Jesus to give in to their way of seeing the world. Ideas about Jesus had been marinating in their brains. “Can you believe it? The Son of God is our rabbi! How cool is that? How cool are we?” They were walking with God come to earth. That must mean something was really special about them, too, right? God wouldn’t hang out with just any one.

And so one day they asked Jesus to make it official: “Jesus, we want you to give us something: Let one of us sit on your right and the other on your left when we enter glory.” Ever the good teacher, Jesus asks them a question to set the hook before going on. “You have no idea what you’re asking. Do you think you’re going to be able to do what I have to do, resulting in a place of glory?”

I’m sure they didn’t even skip a beat. “Yep. You bet.” In their drive to be at Jesus’s side, the brothers fall victim to a classic case of blind ambition. They are eager for power, although they can’t see what they are getting into. As Jesus said, “You don’t know what you are asking.”

I’m convinced it is because they have a faulty understanding of Jesus’s authority, and, therefore, a faulty understanding of what it means to have authority. They see Jesus as a man with power, and they want to be near him to take part in and benefit from that power. What more could you expect from two fishermen who have probably never been well off? They live their lives only barely more respected than shepherds, and one day a rabbi (someone who is respected, a leader in the community) says, “Come, follow me.” The entire point of following a rabbi is to be like the rabbi, to become a leader. The problem here is not that they’re selfish; it’s that they have a wrong read on what power is and how it functions.

When I teach theology in my congregation, I try to make sure that those in the class understand the ways in which our thinking about certain things affects our thinking about other things. If each of us believes we understand ourselves based on who God is, then it is imperative that we have a correct understanding of God. I am notorious for asking, “If that is what you say you want to believe, what does that say about who you understand God to be?” Our God image has a direct impact on the particular way we live our lives.

Despite the biblical text being replete with varied images of God, most of our practical, functional language about God identifies God in much the same way James and John understood God. We also seek out positions of power and advantage. We tell ourselves that if we are called by God to be a leader in various settings, then we must fulfill our duties as a leader in the same way we understand God operating. We, too, must be a “King-Lord-Almighty-Father-and-Protector.” While we want to use our power for good, we still operate with the understanding that we have the power and we will do with it what we wish. When this God image is dominant, the entire task of congregational leadership is put in jeopardy because mission and ministry are eclipsed by power struggles.

Christ pursued reconciliation even to the point of death, and he pursued it through and with humility. This is the message he was trying to teach his disciples when they argued over who was the greatest. We are God’s demonstration classroom. We are to be the place where the world can see how it is supposed to work. If people want to see what the world should be like, they should be able to look at the church for the answer. However, because we have forgotten or ignored this distinction, we instead behave just like the Gentiles. I think this tendency can manifest itself in three different ways in the congregational leadership’s understanding of their roles. Congregational leaders believe that their job is to be:

This understanding of leadership is all about creating and controlling content. In the eyes of congregations who understand leadership this way, a leader’s job is to ensure that there is something to do. This is also part of what feeds the notion that our leaders are experts, that they are supposed to know how to create things for the church to do. So when members enter into leadership with this understanding, they reason that to not provide these kinds of experiences would be to shirk their responsibilities. Why else, the congregation asks, would we be giving our money if not to have the leadership provide us with some experiences, to create content?

Yet, according to Jesus’s understanding, one should not have to wait until he or she is an elected leader before heading up mission projects or ministry programs. Contrary to what most churches do, Jesus tells us that becoming an official leader in a church means giving up our right to head up anything.

Jesus could not have been clearer on this point than when he said to them, “For the Son of Man came not to be served but to serve, and to give his life as a ransom for many” (Mark 10:45). Here is where the final death blow to James and John’s God image comes. By naming himself “the Son of Man” (which was almost synonymous in the Jewish imagination with Messiah), he is saying, “If you want to see how it is that God has determined to ‘save’ you, then pay attention, for it will be nothing like what you have been expecting. I am going to save you by serving you.”

This short verse tells us a lot about how Jesus understood his ministry. He came not to be served but to serve. He did not show up expecting to be waited on; rather, he intends to be the one doing the waiting. He did not expect to walk down the street and have people fawn all over him for his greatness. No, his way is to go to those whom no one fawns over and make them whole again. “I did not come to boss you around. I came to enable and empower you to be the person God has called and created you to be.”

But he doesn’t stop there. Jesus makes clear that he will not only enable and empower us but he will also give his life as “a ransom for many.” With this simple phrase he is demonstrating for the disciples what servant leadership looks like in totality. Just as he is willing to give up his very life, he is also willing to die to certain needs and wants and desires in order to see others living out the desires of their hearts, desires that God has placed within them. And when he says, “For the Son of Man came,” he is saying, “This is who I am (as your rabbi), and so this is who I expect you to be.” Because Jesus acts this way, we are to act this way.

So, what is it that a leader gets done through others? Ultimately, it is mission and ministry, but leaders must understand that the best way to ensure these things happen is by opening up the process to the entire congregation. In truth, the model of leadership circles around to two central ideas: gratis and libre. While leaders are libre, subject to none and free to call the congregation to places it cannot yet imagine, they are also gratis, called to give up their power to become servants of the whole church.

Excerpted and adapted from Open Source Church: Making Room for the Wisdom of All by Landon Whitsitt, copyright © 2011 by the Alban Institute. All rights reserved.

Open Source Church:
Making Room for the Wisdom of All
by Landon Whitsitt

In Open Source Church: Making Room for the Wisdom of All, Landon Whitsitt argues that Wikipedia, the encyclopedia that anyone can see and edit, might be the most instructive model available to help congregations develop leaders and structures that can meet the challenges presented by our changing world. Its success depends, he demonstrates, not on the views of select experts but on the collective wisdom of crowds .

In Scattering Seeds: Cultivating Church Vitality, Stephen Chapin Garner and Jerry Thornell share the story of their home congregation, the United Church of Christ in Norwell, MA. This average congregation has approached congregational life in a not-so-average way. Garner and Thornell don’t claim to have the secret to church growth and vitality, but in sharing the story of their simple church in New England, they give hope and innovative ideas to congregations in regions all over the country .

Humble leadership, grounded in the teachings of Jesus, means recognizing that what we have and who we are are gifts from God, and our lives should reflect our gratitude for these gifts. It requires us to be radically and creatively open to God’s guidance, grace, and presence in everything. When we lead out of such openness, God’s power and grace flow through us. Standish helps us explore the practices and attitudes that make humble leadership effective leadership.

Designed for pastors, executives, administrators, managers, coordinators, and all who see themselves as leaders and who want to fulfill their God-given purpose, The Spirit-Led Leader addresses the critical fusion of spiritual life and leadership for those who not only want to see results but also desire to care just as deeply about who they are and how they lead as they do about what they produce and accomplish. Geoffrion creates a new vision for spiritual leadership as partly an art, partly a result of careful planning, and always a working of the grace of God.

ALBAN CONSULTING:
When you are ready for a more vibrant present and a more fulfilling future! 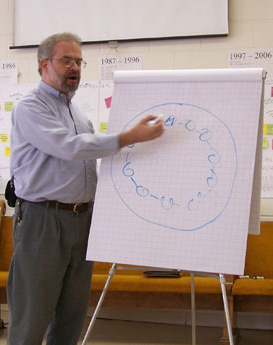 Are you seeking the vision that will galvanize your congregation into action?

Do you need to align your staff, board, and committees to your vision and goals?

Are you stuck in a cycle of unproductive discord?

Is a clergy transition in your future?

An Alban consultant can help ensure that your efforts in these and many other areas facing you and your congregation are meaningful and productive.

Archive  of past issues of the Alban Weekly.